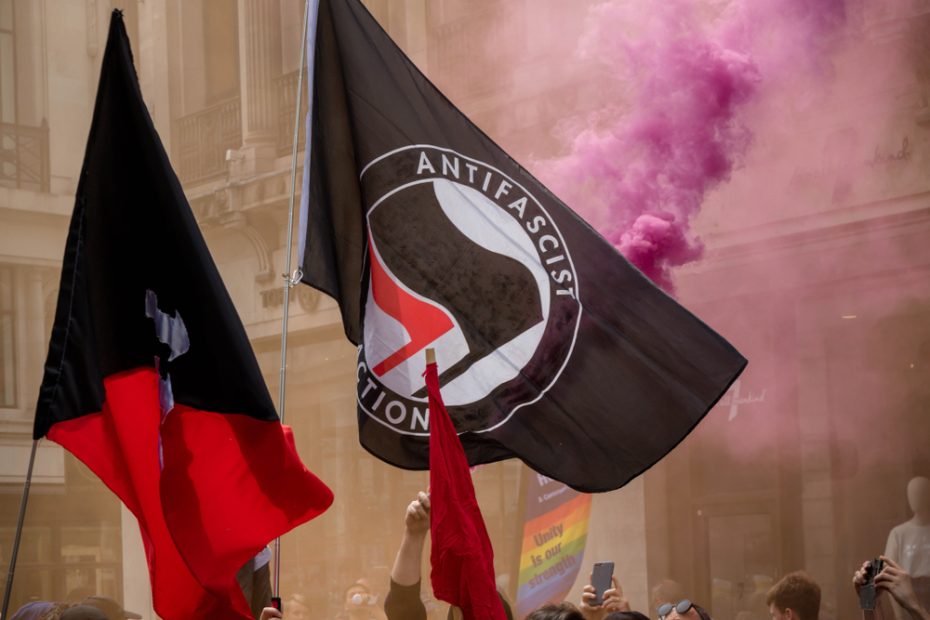 A California teacher who hung Antifa flags up in his classroom and encouraged students to become “revolutionaries” has been rewarded for his vile propaganda with 3 years of full pay in return for his resignation.

Gabriel Gipe came under fire from concerned parents when they were made aware of the dangerous, left-wing brainwashing he had been pushing on kids after he had boasted about it in a video.

The footage was captured by freedom and truth-seekers, Project Veritas. Gipe had engaged in a filmed discussion with the group’s media in which he bragged about hanging the flag on the wall of his classroom and branded a student who said he felt “uncomfortable” about it a “fascist”.

“Maybe you shouldn’t be aligning with the values that this is antithetical to”, he continued.

“I have 180 days to turn students into revolutionaries”, said the warped teacher whose Instagram account contains shirtless photographs of himself displaying a huge communist logo tattoo across his chest.

Gipes was forced to take unpaid leave at the time he made the comments and was set to be fired by the school district for “clear violations of political activity” in the classroom.

It begs the question as to why it was necessary for parents and students to intervene and cause a fuss in order for anything to have been done about Gipe’s blatant radical and extreme views he was dragging into the classroom.

A pro-Antifa high school teacher, Gabriel Gipe, in California received $190,000 — three years of his salary — in exchange for his resignation after getting caught on video saying he wanted to turn his students into "revolutionaries," the Sacramento Bee reported, citing records.🤡 pic.twitter.com/ZDIzGnoF0x

Did no other members of staff notice the flag? After all, Antifa is a far-left group that many suggest should be on the domestic terrorist list.

Surely another teacher must have noticed the social media posts advertising the huge communist tattoo etched across Gipe’s bare chest?

Just to put the cherry on the cake, Gipe even displayed propaganda posters for the Chinese Communist Party leader, Mao Zedong on the classroom wall and gave students who attended left-wing protests extra credit.

When marking students’ work, he would stamp their papers with outlines of leaders like Stalin, Fidel Castro, and Kim Jung Un.

This just doesn’t seem like a man who was hiding his radical political views. So why didn’t the school act sooner? I think we all know why.

In a public statement, the school district said:

“Natomas Unified will be taking the legally required next steps to place the teacher on unpaid leave and fire the teacher.

“The actions and approaches taken by one teacher do not represent the overall staff, students and school community. To those who have felt uncomfortable at any time in the past 3 years, we apologize.”

So that’s one less radical lefty spewing his vile propaganda in the classroom, but let’s face it, this is a drop in the ocean where a wider problem is concerned.