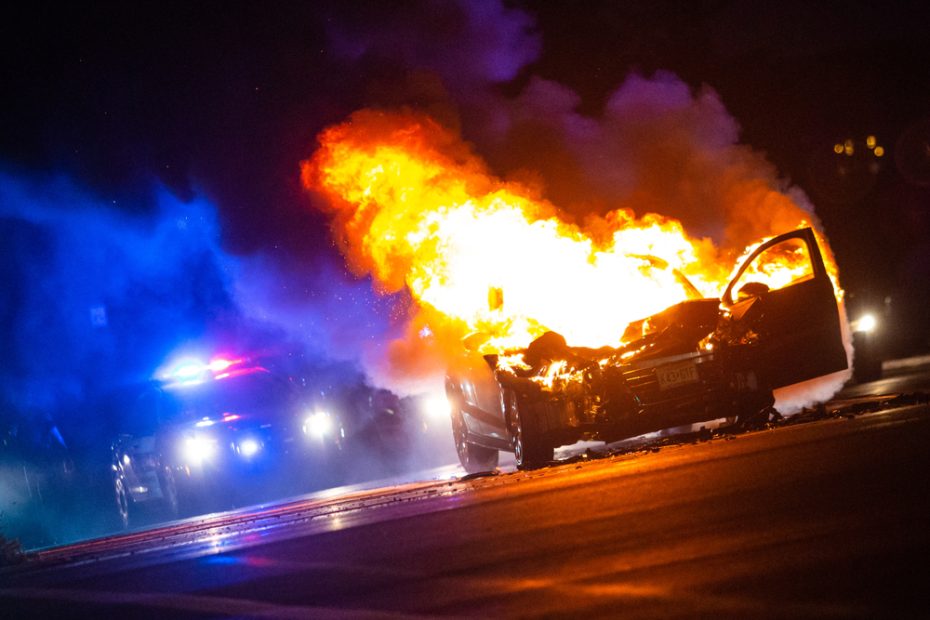 Have you ever seen a tire fire? Those will burn forever, no point even trying to put them out. Better off to let them burn out. How about a grease fire? Sure as heck can’t put water on that. You need a chemical or baking soda. What about a car? Car fires are terrifying, probably because watching movies and television has us all convinced that every burning car is only seconds away from massive explosions. You know, the kind you run away from in slow motion. Of course, with a standard gasoline powered vehicle, you do have the pesky issue of highly flammable gas which could ignite. Potentially a dangerous proposition.

Thankfully the climate alarmists are forcing us into a brave new world of clean energy and electric vehicles. No more fears of explosions or fires being fed by gasoline. I mean, you still do have that teeny, tiny issue of the batteries in an ev. If they ignite, you better run away in some other fashion than slow motion. Ev fires burn hot, they burn long, and it takes tremendous time and resources to put them out. But I’m sure it won’t be a problem when millions of cars on the road and in scrap yards have lithium-ion batteries.

Recently the Stamford, Connecticut fire department had a Tesla fire, and it took a hot minute to put it out. Check this out from the Western Journal:

A Stamford, Connecticut, fire involving a Tesla took three times the normal effort to extinguish, according to the Stamford Fire Department.

And this fire was perhaps an easy one — the car’s batteries fell out of the vehicle onto the ground where firefighters had better access.

Firefighters are obviously trained in how to put out different types of fires. All fire is not created equal. The fact that the batteries fell out, surprising enough in itself, should have made this one a slam dunk, pun intended. Turns out not so much.

Large amounts of water, indeed — 600 gallons per minute — and the fire took 42 minutes to put out, WTIC-TV reported.

Holy smokes! Six hundred gallons a minute to just extinguish a battery?  And it took 42 minutes? How are volunteer departments that have to either have their own pumpers, or fires in rural areas where no hydrants are available going to deal with lithium-ion fires if we are all going to be forced to “go green”? Seems as though that is terrible for the environment!

More than five hours after the initial report of the fire, the Connecticut Department of Energy and Environmental Protection, the Stamford Fire Hazmat Team and a company specializing in hazardous waste were on the scene, readying the Tesla for removal, according to the fire department.

So, imagine with me if you will, a busy interstate on a holiday weekend, travelers all happily going to see family, friends, what have you. Everyone is zipping along in their shiny, green, zero emission electric vehicles when someone has an accident, and the batteries ignite. Fast forwards 5 hours later as you are still sitting in your now dying electric vehicles, waiting for hazmat teams to clear the accident. That sure sounds like a good time, doesn’t it. Think it won’t happen? Just wait. This is our future, all in the name of windmills and solar panels.

In the Connecticut fire, if the fire department pumped 600 gallons a minute for the entire 42 minutes, it would total more than 25,000 gallons.

I didn’t even mention, how is enough water going to get to an accident site on a crowded interstate? Enough to put out a fire that requires 600 gallons of water a minute, for 42 minutes? This has all the makings of disaster after disaster. This particular fire was on a Tesla, which is a state-of-the-art electric vehicle. What’s going to happen when we finally get affordable entry level ev’s? Anyone think Kia is going to have the same fail-safe technology as Tesla?

Folks, it might be a good idea in the not-so-distant future when traveling in your new ev to keep supplies with you in case you get stuck. Fresh cell phone battery, water, blankets, and maybe wieners and marshmallows for the inevitable battery fires. Bon apetite!