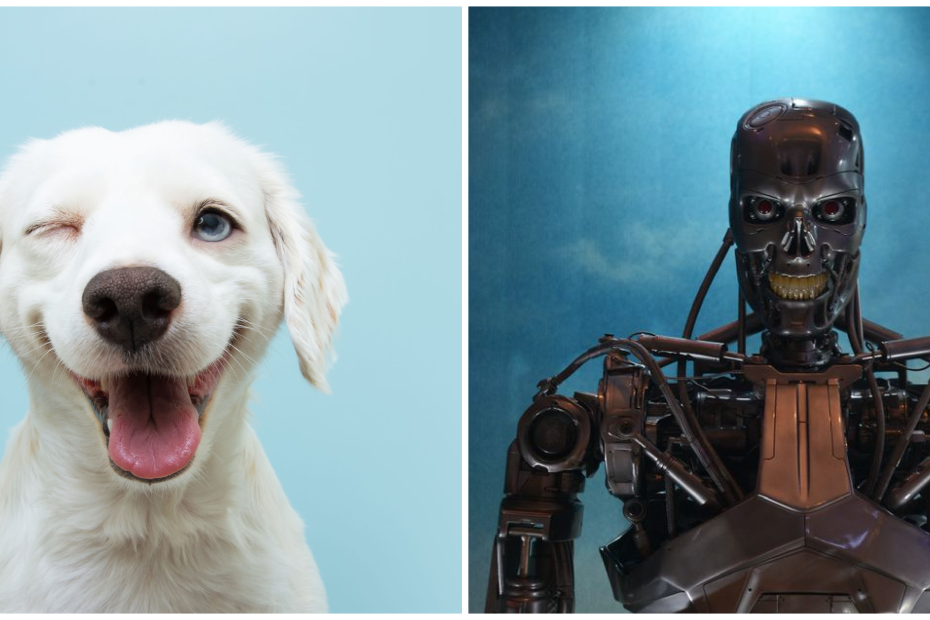 We have all seen movies about dystopian futures, haven’t we? No, I’m not referring to Democrat election ads, I’m talking about movies like Terminator, Planet of the Apes, The Edge of Tomorrow; you know, stuff that might actually happen as opposed to Democrats keeping the House and Senate. Apparently as a species, we just can’t help ourselves when it comes to creating technology that could one day take us out. We already dabble in viruses and diseases that could eradicate most of us. We also like to fire lasers at each other at the speed of light, just to see what happens. Black hole maybe? If you don’t believe me search “Large Hadron Collider” and prepare to not sleep for a while.

Speaking of lasers, remember when Dr. Evil wanted sharks with lasers on their heads to take out Austin Powers? Silly movie stuff, right? Well, the Chinese apparently have been watching, except they are using dogs and guns. Pet your cat and check this out.

A Chinese military contractor created a video showing off its terrifying new military technology, revealing a robot attack dog that can dropped off by a drone.

The video that was initially released on the verified Weibo account of “Kestrel Defense Blood-Wing,” a page affiliated with a Chinese defense contractor, shows a drone hovering over a building and then dropping off a robot on the roof. After the drone flies away, the robot gets up on four legs and then begins to scan for targets around the building with what appears to be some sort of automatic weapons attached to its back.

Well great. At least sharks are “mostly” resigned to the water. The Chinese are so technologically advanced that they can build a robot dog with a freaking machine gun on its back that can walk around smoking cats, mailmen and pickup trucks, yet if I order something from Wish it takes 6 months to get here and falls apart almost immediately. Slight disconnect there, no?

Count on the Chinese to be ahead of the United States when it comes to terrifying robot pets. Perhaps our military can develop cats with flamethrowers. Maybe Shetland ponies with robot monkey’s riding on them carrying grenade launchers. I hear robot monkey’s work for peanuts. Boom!

I would also be remiss if I didn’t mention that “Kestrel Defense Blood-Wing” is the most bad-ass defense contractor name in history. I guess “We Will Shoot You in the Face Capitalist Pig” was already taken.

According to a report from WarZone, the weapon mounted on the robot dog is possibly a Chinese QBB-97 light machine gun, which is capable of firing 650 rounds per minute at an effective range of 400 meters.

That’s a lot of rounds when all you want to do is scratch its little robot belly. Maybe the solution is some sort of robot bone or explosive snausage. Predictably, the Chinese description translates poorly enough that it’s part terrifying, part hilarious.

A description of the robot posted by Kestrel Defense Blood-Wing and automatically translated to English boasts that the weapon can easily “launch a surprise attack.”

“War dogs descending from the sky, air assault, Red Wing Forward heavy-duty drones deliver combat robot dogs, which can be directly inserted into the weak link behind the enemy to launch a surprise attack or can be placed on the roof of the enemy to occupy the commanding heights to suppress firepower. And ground troops [can] conduct a three-dimensional pincer attack on the enemy in the building,” the description reads.

I hope China’s customer support for the combat robot dogs is in India so they can experience the same level of hilarity and frustration we do with translations. The truly terrifying part is China is currently working on artificial intelligence to make the hell hounds autonomous. If that happens, imaging thousands of little robot Chihuahuas parachuting in with machine guns and distemper. Cats and mailmen everywhere would be a dying breed. You know what happens if we have no more mailmen? No more crappy deliveries from Wish.com! Check-mate China!

Let’s hope when Elon Musk is finished fixing Twitter, he can turn his attention to developing a robot of our own that can challenge the Chinese hounds. While the military focuses on gender studies and pronouns, Musk can help America win the war in the kennel. Mailmen and kittens alike must be saved.