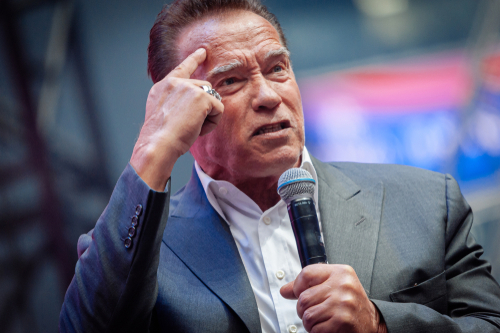 Movie star and former Governor of California Arnold Schwarzenegger is being accused of farting in a female co-star’s face.

Miriam Margolyes, who appeared alongside him in the 1999 horror film “End of Days,” claims that the “Terminator” legend, purposefully farted in her face at some point during the film’s production.

During the most recent episode of the “I’ve Got News for You” podcast, “Harry Potter” actress Margolyes, 81, made a huge stink about the incident, and she also said that Schwarzenegger “was genuinely extremely unpleasant” during the film’s shoot.

The New York Post had more details to add about the absolutely bizarre story:

The Brit thespian dropped the bombshell allegation when the host asked her to reveal her least favorite co-star of all time.

“[I] didn’t care for him; he’s a bit too full of himself,” Margolyes said about the former California governor. “He farted in my face. Now, I fart, of course I do – but I don’t fart in people’s faces. He did it deliberately, right in my face.”

She then went on to describe the biblical action flick: “I was playing Satan’s sister, and he was killing me, so he had me in a position where I couldn’t escape and lying on the floor. And he just farted.”

“It wasn’t on film, it was in one of the pauses, but I haven’t forgiven him for it,” the “Mulan” star said.

Last year the former beloved Republican governor distanced himself from many conservatives after he told Americans who are refusing to mask up “screw your freedom”. That wasn’t all though, he would go on to call anyone not vaccinated or wearing a mask a “schmuck”.

In addition to this, he drew on his background as a bodybuilder to support his argument that people should have faith in contemporary medicine: “There’s no one that understands more about a bicep than I do since I researched this problem for 50 years, and the same is also true with the virus.” The folks that are out there, the specialists, research this topic on an annual basis.

In addition to this, he requested that Americans show proper respect to professionals like Dr. Anthony Fauci and adhere to the protocols that he and the Centers for Disease Control and Prevention established.

Instead of making hit movies, Schwarzenegger has decided to release propaganda-filled rants which attack anyone who supports freedom or Donald Trump. When the capital was overtaken by protesters on January 6th the former movie star went to YouTube and exaggerated how Trump supporters are similar to Nazis.

Besides pushing vaccines and anti-Trump rhetoric, the Kindergarten Cop star has also spoken at climate change events where he has pushed left-wing data that claims that the world will be destroyed by carbon emissions unless humans change their ways.

It appears everybody that was popular in the 90s is now just mouthpieces for the Democratic machine.