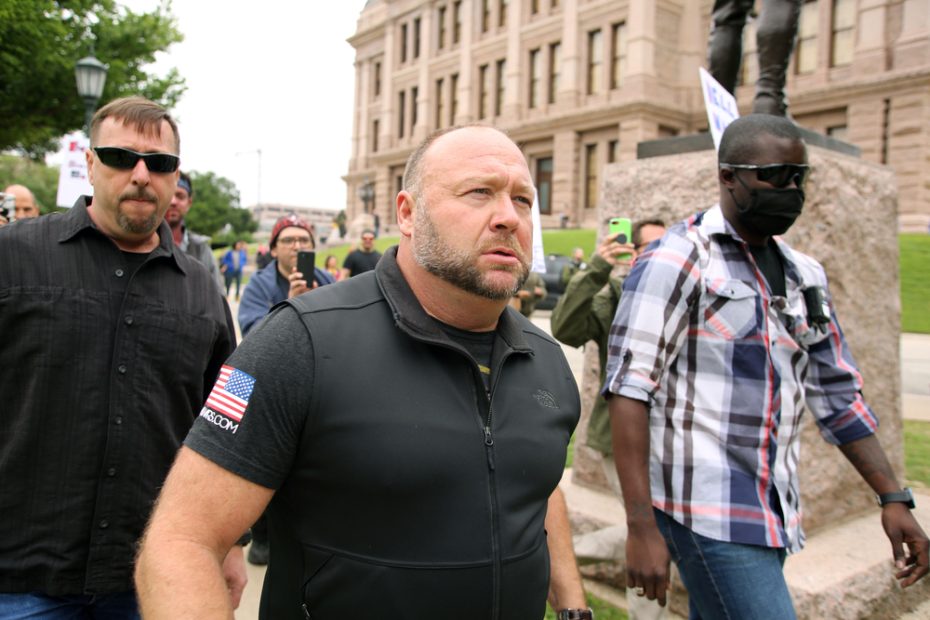 Controversial, conspiracy-theorist, Alex Jones blasted the court’s order for him to pay $50 million in damages to the family of Jesse Lewis, 6, who was murdered in the Sandy Hook school massacre.

Lewis was gunned down by Adam Lanza at Sandy Hook Elementary School in 2012. The evil, depraved gunman shot and killed 20 children during the massacre including Lewis. He also murdered a further six people outside of the school.

But Jones, 48, who hosts a podcast called Infowars has continually claimed that the shooting was a hoax choreographed by the US government in order to push for tighter gun controls.

A defamation trial was brought against Jones by Lewis’ parents, Scarlett Lewis and Neil Heslin who said they had endured harassment and emotional distress as a direct result of Jones’ claims in his podcasts.

On Thursday, a jury in Texas ordered Jones to pay the bereaved family $49.3 million in damages which were meant to cover the family’s cost of having to hire private security following the threats they received because of Jones’ rants, but also to act as a deterrent against him making any further remarks:

“We ask that you send a very, very simple message and that is: Stop Alex Jones,” said the family’s lawyer on Thursday.

“Stop the monetisation of misinformation and lies. Please.”

But Jones took to his podcast yesterday to make some more wild accusations. He said that the trial had been “coordinated and run” by billionaire George Soros and other “operatives”.

Bizarrely, he also attacked Judge Maya Guerra Gamble, claiming she was a “blue haired SJW” (social justice warrior) who had “altered the record for the trial”.

He also said the judge had deliberately turned off the livestream in the court to try to distract him.

“This is beyond any kangaroo rigged court ever,” he remarked before accusing Gamble of “coordinating with the corporate media.

Jones then turned his attention to the parent’s lawyer, Mark Bankston, who he deemed to be an “ambulance chaser”.

Forensic economist Bernard Pettingill took to the stand on Friday to say that he estimates Jones’ net worth to be around $270 million from promulgating “some hate speech and some information” which “made a lot of money”.

During his Friday podcast, Jones rubbished the claims and said he was actually worth less than $5 million. He went on to say that the most his company had made in a year was around $70 million:

“It’s not bad to make money. I wish we have a lot more money. We could do a lot more and not be so desperately trying to cling to stay on air,” he said.

His fans argue that while some of his remarks may be inflammatory, the right to peaceful free speech should be protected.

“Alex Jones is worth almost $270 million that we know of. Please take an amount that punishes him, and an amount that ensures he never does this again,” said the parent’s lawyer in his closing statement.

“Sandy Hook happened. Jesse was a hero. Alex Jones was held accountable. Today the jury proved that most of America is ready to choose love over fear and I’ll be forever grateful to them.

“Ironically, Alex Jones ended up giving me a larger platform to share Jesse’s story and message.”

The brave mom shared a link to the Choose Love Movement which is a charity dedicated to spreading a positive message of change by teaching kids coping skills, anger management and encouraging a kinder atmosphere in schools.