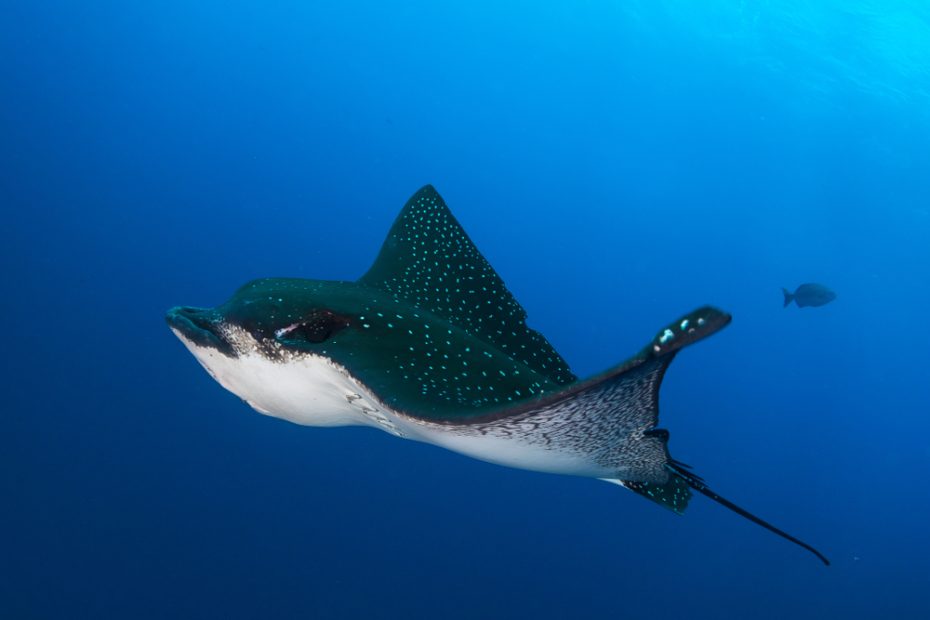 This family got a bigger catch than they were expecting when a rare 7-foot-wide, 400-pound spotted Eagle ray jumped into their fishing boat before giving birth.

The Jones family set out on their boat to try to reel in some fish for the 2022 Alabama Deep Sea Fishing Rodeo.

As they began to set up their rods near the Sand Island Lighthouse, Dauphin Island, Alabama last Friday, a huge ray shot out of the water, slapping mom-of-one April Jones before landing on the back of the boat:

“We were participating in the Alabama Deep Sea Fishing Rodeo. We were out fishing off the coast of the Sand Island Lighthouse on Friday and I wasn’t catching anything, but my husband, husband’s father and son all were” April told Fox.

“We were trying to get a fish for me to catch. So I told them I was ready to leave and head to a different spot. We packed everything up — and as we were pulling away, there was a hard hit and a water splash.”

“I felt something hit me,” she continued, “and then I see this big blob flopping around in the back of the boat.”

Jones said the ray was so big and heavy that she was making the boat take on water. Unfortunately, she was stuck in the boat and was unable to get herself back into the ocean:

“We made some calls” for help, she said, to try getting it out — “but she was so heavy that she was also weighing the boat down, and we were getting water in the back of the boat.

“We made the decision to get back to shore.”

During the 20-minute journey back, the Jones family did everything they could to help the rare breed survive, dousing her with buckets of sea water as they went.

“We drove to the closest boat launch, which happened to be where the Dauphin Island Sea Lab was,”continued April.

“I ran into the lab to see if anyone could help get her out. In the meantime, some people had come to the boat and helped her get out.”

It was then the story took another twist when, upon moving the ray with the help of lab workers, they discovered she had given birth. Unfortunately, the babies were not alive:

“She had delivered four babies. We had no idea when she did it. They were not moving.”

Staff from the sea center confirmed that the babies were sadly born prematurely, a phenomenon they said was common when stingrays get into difficulty:

“They were not alive — so we donated them to the Sea Lab. They said they would use them to show kids and tell the story about [the] mom — and how rare it was to see an eagle ray,” said April.

April added that although the huge ray, which had a barbed tail, had hit her on its way into the boat, she suffered no injuries and she noted that “the tail was very long, and it looks like the barbs were at the end of her body, not her tail.”

The beautiful ray was released back into the ocean.