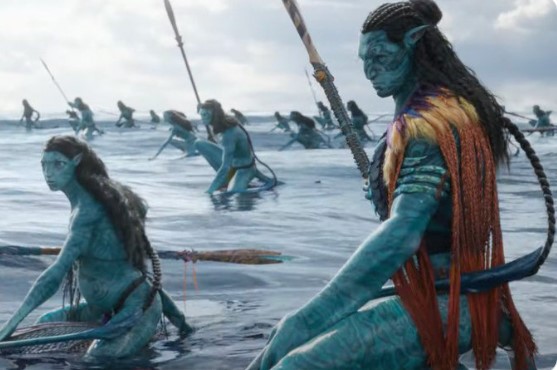 We are here, folks. We are at the very edge of reality and teetering dangerously close to going over. The wokeness, virtue signaling, vitriol from the left and general bitching has gotten to the point that you can’t even go to the movies. The left would have us homogenize entertainment to the point where it isn’t even entertaining anymore. There is little compelling at the cineplex these days, outside of the occasional Tom Cruise movie, so when James Cameron announced the release of the 13 years overdue sequel to Avatar, audiences were delighted. Unfortunately, the movie has disappointed at the box office, and pissed off lefty social justice warriors everywhere. Why? Apparently blue face is bad? Check this out.

Native American groups are calling for a boycott of the film, “Avatar 2: The Way of Water.”

A co-chair of Indigenous Pride L.A. says Cameron normalizes “Blueface” — Avatar’s aliens are blue — to satisfy white viewers. And thereby the film is overtly racist, and thus moviegoers shall boycott it immediately.

This is not an article from the Bee, rather actual adults, telling other adults that aliens shouldn’t be blue because it is satisfying to white viewers. You can’t make this up. I’m not sure if the Native American Groups have any insight to what color the aliens in the movie actually are, since it is a movie, and they aren’t real.

Do NOT watch Avatar: The Way of Water

Join Natives & other Indigenous groups around the world in boycotting this horrible & racist film. Our cultures were appropriated in a harmful manner to satisfy some 🏳 man's savior complex.
No more Blueface!
Lakota people are powerful! pic.twitter.com/NmHVU565u3

“Our cultures were appropriated in a harmful manner to satisfy some white man’s savior complex,” she says.

I’m beginning to think that the only resource we are running out of is common sense, and whatever the planet is that these blue face cartoon characters live on might be more preferable. It goes further than just Indigenous groups. Since some race baiters can’t stand to be left out, a black so-called movie critic had this stunner.

A character named Kathia Woods credits herself as a Rotten Tomatoes-approved critic. She sometimes writes for NBC News. More importantly, she demands the studio do away with the white people who portray the aliens.

According to Woods, casting whites as blue creatures is a form of “cultural appropriation.”

Have we lost our damn minds? Until actual aliens show up to complain about white folks portraying aliens, maybe just assume they are ok with it? The best part of her rant? Her ignorance. The actor in her Tweet is Cliff Curtis, a man of Māori descent, portraying Tonowari. Oops, research much before you race bait for likes?

At some point we gotta talk about the cultural appropriation of Avatar and white actors are cos playing as poc. It’s just a mess and so not necessary & no amount of visual effects/CGI is gonna erase that. Bad Lace fronts/Dry synthetic braids. Jesus fix it pic.twitter.com/VcNkSlvRTp

I wasn’t going to see the new one anyway. I actually fell asleep in the first one. However, considering the outpouring of distress from the woke crowd, I just might catch it when it gets to the discount theater. Are those a thing anymore? I know that black lives matter, white lives matter, and all lives matter. Now I guess I can fly my blue lives matter flag as well. Probably have to take down my Ukraine flag. Hope no one protests.