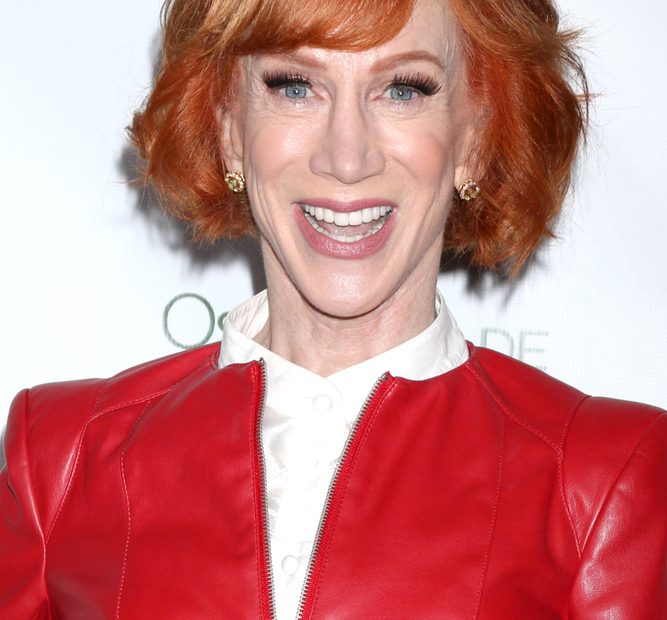 In her continued quest for relevance and attention, actress and unfunny comedienne Kathy Griffin has weighed in on the recent Johnny Depp-Amber Heard verdict, calling the jury’s decision to award Depp $15 million “really disturbing” and boasting her support for Heard.

On the “Just Ask the Question” podcast with CNN political analyst Brian Karem, Griffin called out the Pirates of the Caribbean star, referring to him as an “orange, fat, bloated boozebag… Donald Trump with a ponytail.”  Karem had asked Griffin her opinion on the Depp-Heard trial and she told him that she and Heard are friends and that she completely believes Heard’s allegations against Depp, but the verdict rankles her as a woman and a feminist.

“I just think Depp is gross,” she declared:

These Johnny Depp stans that are talking about this trial and yet they refuse to show pictures of what he looks like now, which is a big orange fat bloated boozebag. He looks like Donald Trump with a ponytail. And so they keep sticking up for him and being like, “Amber is taking down Johnny! He’s so gorgeous and dreamy!”

Johnny Depp Gets ATTACKED By Washed Up Kathy Griffin | She Stands With L… https://t.co/GVBlE0ZdEC via @YouTube

Griffin also criticized Depp’s way of speaking, suggesting he is using Rolling Stones’ Keith Richards for voice inspiration: “I’m like, okay, he talks like Kanye when Kanye had his jaw wired. He has a fake accent like when Madonna turned British. So, you know, who are we kidding here?”

Karem agreed: “He’s a Kentucky boy, so every time I hear that from him I go, ‘He didn’t learn to speak like that in Kentucky,“ to which Griffin responded, “He learned it from his idol Keith Richards.”

She even speculated that Depp’s ex-girlfriends Kate Moss and Winona Ryder were afraid of being “Amber Heard’d,” which explains why they won’t speak out against him. Moss testified at the trial via video from London that Depp never abused her during their relationship.

People were fascinated with the six-week trial which topped news stories across the media landscape. Griffin noted that the public response was a “social media bloodbath” and was quick to prop up the #MeToo movement, declaring it still alive and well.

A seven-person jury in Fairfax County, Virginia, deliberated for days before deciding last Wednesday that Depp and Heard each wronged the other, although they determined that Depp was defamed by Heard in her Washington Post op-ed piece and was the more aggrieved party.  However, the jury did award Heard $2 in compensatory damages, a far cry from the over $8 million in damages she will need to cough up to Depp.

Elaine Charlson Bredehoft, Heard’s attorney, told the Today Show that the actress cannot pay the roughly $8.35 million in damages due to Depp. It’s been reported that Heard is relying on her homeowner’s insurance to pay her rapidly mounting legal fees, although some sources have claimed that Heard’s lavish spending is the real reason she is broke. Bredehoft said that she and her team plan to appeal the verdict, claiming the jury was influenced by social media and appeared to collectively support Depp over Heard.