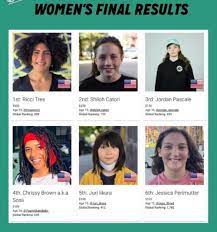 On Saturday, at a skateboarding tournament in New York City, A 29-year-old biological male who identifies as a transgender woman beat out a 13-year-old girl for first place. Ricci Tres, who also goes by Ricci And Tres, took the top title in the women’s division of The Boardr Open, taking home the grand prize of $500.

Shiloh Catori, a 13-year-old girl ranks 133 in the Boardr Global Ranks, which are based on performance in skateboarding competitions. By comparison,  Tres ranks at 838.

Many took to social media, blasting the Boardr Open for allowing a biological grown man to beat out a bunch of children in a skateboarding competition.

Skateboarding for 11 years, Taylor Silberman previously lost to transgender rivals twice on social media, including missing a $ 5,000 prize at the Red Bull Cornerstone Tournament in May.

“I deserved to place first, I You will be admitted to win and get paid, “Silberman wrote. “I contacted Red Bull and was ignored. I’m tired of being bullied by silence.”

Christina Pushaw, who is the spokeswoman for Governor Ron DeSantis, questioned the age gap between the contestants. “Why are 28-29 year olds competing against children?” she wondered in a tweet.

In an interview with the Daily Mail, Tres suggested that she doesn’t feel that she’s fully a woman and that her transition was limited to hormone therapy.

“I know I will never be a woman, because women are miraculous, they have babies and create life and do all that awesome stuff,” she told the Mail. “I’ll never have that ability but I feel like I am a woman.”

She also rejected the idea that testosterone levels should dictate eligibility for female events.

“You can’t ask an elite professional athlete to compromise their health,” she said. “Besides the fact that I’ve explained transitioning as a sense of enlightenment has nothing to do with your testosterone level. It’s a matter of decision and feelings. And you’ve finally decided to be you.” Okay, dude, you beat out a group of little girls in a skateboarding competition while competing as a woman.

Tres had also attempted to participate in the Women’s Street USA Skateboarding National Championships to help further her bid to qualify for the Olympics, but she was rejected because she had too much testosterone.

Born as Richard Batres, Tres served four years in the Navy and had three kids with her now ex-wife before becoming a woman.

Tres and her ex-wife live together in Los Angeles and co-parent their children.

“I am 28, I have three kids, I’m married, I did my time in the military, I own a company,” he said. “I’ve decided that I like being pretty and cute.” And apparently, enjoy the taste of victory against biological girls not even old enough to vote.

Why are 28-29 year olds competing against children?